While Beagles are considered to be relatively healthy, there are several diseases and conditions that are breed specific, or shared with a small amount of other breeds. We are fortunate to have available tests for most of these conditions, so it is possible to make wiser breeding decisions for future generations. Some things we still do not have the ability to test for so it is important that Breeders are honest about their lines, in order to be able to effectively use pedigree studies as a means to trace back some of these conditions. The honesty of our Breeders is the key to breeding wisely when tests are not available.

The following is a list of conditions that we can test for:

Musladin-Leuke Syndrome (MLS)  MLS is a genetic disease affecting the development and structure of the connective tissue. Both males and females can be affected. This condition is inherited as a recessive trait. MLS affected puppies get increasingly worse in the first year of life and then appear to stabilize at about 1 year of age. Typically beagles affected with MLS will have very tight skin, flat skulls, slanted eyes, and walk high on their toes with the last toe being set very high on the foot. They walk with a stilted gait due to the tight muscles and tissues. They are otherwise fairly healthy, but due to the stress on the feet, they are prone to injury and damage to the feet. Without other serious complications, beagles affected with MLS can live a reasonably normal life. There are different levels of affectedness. Those that are more severely affected will have more physical challenges over the years.

Factor Vll Deficiency (FVll)  FVII is a mild to moderate, inherited blood clotting deficiency. Both males and females can be affected. This condition is inherited as an autosomal recessive. If affected with this condition, the blood takes much longer to clot, so surgeries and injuries may cause the dog to bleed out because  the blood is so slow to clot. It is recommended that affected dogs be tested for clotting times. Some affected seem to clot normally, while others are very slow to clot. It is important that your Vet be aware of this clotting disorder before any routine surgeries are performed.

Neonatal Cerebellar Cortical Degeneration (NCCD)  In Beagles the condition is neonatal and onset is noticed at about 3 weeks of age as puppies begin to walk. The severity of the condition is variable among individuals but progression of clinical signs is minimal. Breeders used to refer to these puppies as “tumbling puppies” or “drunken puppies” as they have a difficult time with balance when walking and often circle and fall down. As they get older, they seem to be able to moderately adjust but continue to fall. Many Breeders will euthanize these puppies, so the condition has been going on for years before it was really identified.  It is a recessive gene and both parents must carry the gene in order to get an affected puppy.

Imerslund-Gräsbeck Syndrome (IGS)  This is a disorder found where dietary cobalamin (vitamin B12) is unable to be absorbed through the gut. Beagles with this condition have a difficult time maintaining a good weight. They can have poor coats. They are often tired and lethargic. Some produce excess urine and are anemic. The disease is autosomal recessive affecting both sexes. There has been great success with weekly Vitamin B12 shots for treating this condition.

Because there is testing available for any of the above conditions, the future is quite bright for breeding programs if Breeders are willing to test AND report the results.

Other conditions common to beagles:

Thyroid Disease  Beagles also are prone to thyroid disorders.  A simple blood test is all that is required to determine if there is a problem with the thyroid. Often the clinical signs of the disease don’t present until the dog has actually been affected for a long period of time. Therefore is is suggested that thyroid panels be run starting at an early age, as dogs could have been used for breeding before anyone was aware of problems with the thyroid.

Steroid Responsive Meningitis  (SRM)    SRM “beagle pain syndrome”  is becoming more common in the breed as it  has been misdiagnosed over the years due to mimicking other conditions. Typically a beagle with SRM is in pain. They have difficulty lifting and turning the head. There is usually a fever involved, shaking, lack of appetite and muscle spasms. It is very painful.  Many Vets diagnose Intervertebral Disk Disease and treat with pain medication and sometimes surgery. As SRM will often resolve itself for periods of time, the diagnosis of IVDD is thought to be correct. Typically SRM is first seen in puppies from 4 – 10 months of age. It is generally recurrent and in mild cases can resolve itself with no treatment. The most effective treatment is massive doses of steroids which reduces the inflammation. Some dogs grow out of the condition, others will have to be maintained on steroids for the rest of their life.

Epilepsy This disease is quite common in beagles and is also the best kept secret. There are two forms of idiopathic epilepsy in our breed. Early onset epilepsy first presents from about 18 months to 5 years. Late onset epilepsy typically presents on or around 7 to 9 years. Before idiopathic (primary) epilepsy is diagnosed, other factors must be ruled out. As seizures can develop for a number of reasons, all other avenues must be explored before determining that primary epilepsy is the diagnosis. There is no test for epilepsy. There is successful treatment in most cases, but it is a life long treatment with anti seizure drugs that can also have unpleasant side effects. Because this condition has been kept secret for so long by breeders, the disease is more common today. Breeders have been afraid to discuss having produced epileptic puppies so the problem will be ongoing in our breed until people make the decision to speak up.

While there are other less common conditions, the above represent the conditions that we can test for, or need to find a test for. Testing is available on so many today because of the work of dedicated Breeders in North American, UK and Europe who have taken a personal interest in bettering the breed through health, as well as structure. style and temperament.

For more information please visit Aladar Beagles at: http://www.aladarbeagles.com/toc.html
Our friends at Aladar have a very comprehensive site for Beagle Health. I have given a small overview of some of the more important health issues in the breed, but for a more indepth look, check out this link. 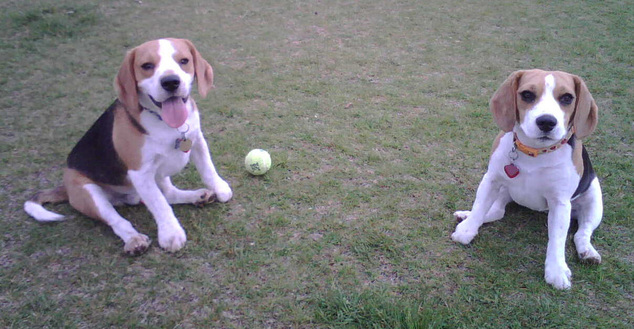 Here are two littermates that have MLS. They demonstrate the typical stiff legs, upright toes, flat heads and slanted eyes that are clear indicators of the condition. Note, the way these dogs are sitting. Because their muscles, tissue and skin is so tight, they cannot sit like an average beagle. 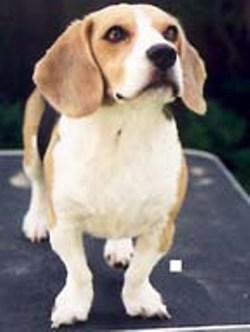 Here is an example of a beagle affected with Chondrodystrophy.
Note the short crooked front legs and small dwarlike stature.
While this condition sometimes is confused with MLS, it is
very different in nature although  can look similar.